It was time to get off my ass and start doing something for myself.  I had been living a somewhat hermit-like lifestyle now for the past 10 months wondering where all my drive to do things had gone.  I was dumbfounded with my lack of motivation in trying anything new. Hadn’t I, while walking a beach in Mancora, Peru, decided that once home, I would do things better and actually pursue the things that gave me happiness. While perusing the Cooks of Crocus Hill website late one evening, I stumbled upon a class titled “Professional Approach to Basics” taught by Master Chef and Instructor from Cordon Bleu, Van Keszler.  A class that teaches many of the foundations for making stocks, sauces, soups, and yummy foods was just what I was looking for.  And just a couple of days after Christmas, I wouldn’t have to worry about sneaking in one last gluttonous moment before my news years resolutions would rear their ugly head.

Arriving early on Saturday morning, I found my place right in front of the chef just as he was starting to cook down two huge blocks of all-natural butter.  Yeah – I knew the food was going to be good.  Van Keszler started to address the class by detailing what we could expect from the next two days.  His dry wit and sarcasm quickly put the class at ease.  I felt like the class was mostly full of people similar to me – people that love to cook, but not necessarily comfortable with all the details.  People looking to bring more to their own personal cooking. After about 45 minutes of cooking basics, methods, and a bit of science behind the cooking, we started creating teams for cooking projects.  “Who wants to do fish?”. 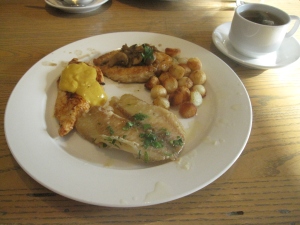 I slowly raised my hand and then 3 followed suit.  After picking teams, we got started.  Everyone, I think myself included, shot up and started gathering supplies, asking each other what we should do, and then realizing that no one really knew how to start.  Our initial mild freak-out sessions quickly abated as the chef moved from team to team offering encouragement and insight.  There were times he’d snarkily respond to something that you were trying to do.  While helping me out, I joked “I hope you don’t go Gordon Ramsey on me.”  He smiled and responded “I don’t get mean, I just get sarcastic.”  I can handle that. 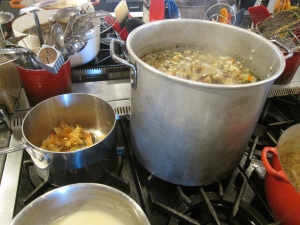 The first day saw all of the teams creating various stocks (Brown, Chicken, Fish), Chicken Marsala, Pommes Parisienne, Sole Meuniere, Cream of Mushroom Soup, French Onion Soup, Various Viniagrettes, Shrimp Bisque, and some sauces / veloutes.  Everyone involved sat down for dinner twice, and by the time all of us left for the day, we vowed that we wouldn’t be eating dinner that night.  Instead, I decided to celebrate my day of cooking instruction by meeting up with some friends for some drinks.  But really, do you ever need a reason to go out with friends for drinks?

The next day, I arrived early so that I could claim a spot in their small parking lot.  I had a half hour to kill, so I went next door to Bread and Chocolate for a Chai and some Cardomon Cake.  I’m not sure why I ordered the cake considering in 2 more hours, I would be stuffing myself with more comfort foods. Class started similar to the day before where the chef talked about Braising techniques, sauces (derived from the stocks that we created the day before), and the various recipes we would be tackling that morning.  The morning session ran longer due to the length of time needed to cook the Balsamic-Braised Short Ribs, Coq au Vin, the Pork Blanquette, and all the

accompaniments to go along with it. Cooking in that setting goes pretty well overall, until it doesn’t.  My class members looked over with amusement as I called out “Chef, may I confer with you about my peas?”  Dear god, please, I don’t want to be the guy that screws up cooking peas.  In the end, I hadn’t really screwed up the peas.  The lettuce we had used for that recipe wasn’t the highest quality and tended to bunch up in the mixture.  Our makeshift family for the weekend finally sat down around 1pm for our first dinner.  It was incredible – If I was impressed from the day before, I really was impressed now with the food we were preparing. The menu for the second half consisted of Fish en Papillote (white fish cooked in parchment paper), Roasted Chicken, Stuffed Pork Loin, Glazed Carrots, Steamed Brocolli, Green Beans Armandine, and Rice Pilaf.  To accompany all these dishes, all of the teams were responsible for making a sauce or two.  My team ended up making beurre blanc and sauce supreme (a mushroom sauce).  And, just before sitting down to eat second dinner, the instructor demonstrated the art of making hollandaise sauce.

When we finally sat down for our last meal, everyone, including myself, admitted that none of us were really hungry at all.  Do you think that kept us from eating the food we just prepared?  Not at all.  Like the day prior, we vowed that we wouldn’t eat dinner that night.  I stuffed myself as much as I could, fearing that if I went any further, my liver would turn to Foie Gras.  But, I finally had to admit defeat and lay down my fork.  The food had won, and I had gained a great deal of knowledge to improve my cooking that weekend.  Before leaving, I and several others tried to lend a helping hand to the dishwasher’s that had made our jobs so much easier that weekend, but we were shooed-away.  As we filtered out of the kitchen, we passed by our teacher and mentor and said thanks.  I added that I appreciated his patience and asked for a recommendation on a bread baking class.  I already had my sights set on my next challenge.

How I Learned to Stop Worrying

Musings on bicycling, travel and life.